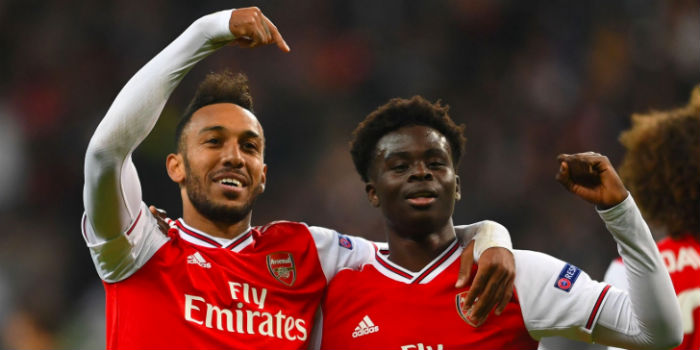 Unai Emery was quick to praise the contribution of Emile Smith Rowe, Bukayo Saka and Joe Willock as three of Arsenal’s Academy graduates starred in a 3-0 win over Eintracht Frankfurt in Germany.

Man of the match Saka laid on assists for Willock and Pierre-Emerick Aubameyang and found the net himself with a beautiful curling effort from 25-yards as the Gunners weathered constant pressure from the home side to start their Europa League campaign in thrilling style.

After the game, the boss reflected on Saka’s eye-catching first start of the season before turning his attention to his other youngsters.

“Maybe with his goal, maybe with his performance during the match, he took confidence in his finishing and was strong physically,” he noted.

“Also, it’s the same with Emile. After his injury, tonight he played for the first time for us this season and he did well.

“Willock was aggressive in the midfield and worked well in the space. Progressively he got better throughout the game and gave a good performance.

“Some other players like Lucas Torreira and Chambers worked a lot.

“Everybody can be happy. After, it’s about continuing. This competition is a very big challenge for us and we’re excited to do something important. After tonight’s good result against a big team, I think that’s important.”

Emery went into more detail about Smith Rowe, who, due to injury and a loan move to RB Leipzig, was making his first start for Arsenal’s senior side since December last year.

“With him, we need to do more work with him on the pitch and outside,” he said.

“Last year, he started well with us and played some matches. After, he left on loan to Germany and then when he came back he was injured.

“He played some matches with the under-23s, so today was big challenge for him. It was a big opportunity but also we needed to protect him. He worked very well and I was very happy with him. I told him that.”

Emery: Tierney is ready to play

Arsenal 4-0 Standard Liege: By the numbers