Ole Gunnar Solskjaer’s revolution at Old Trafford is set to go up a notch next summer, as the Manchester United boss plots another raid on English talent.

Following the arrivals of Harry Maguire and Aaron Wan-Bissaka during the most recent transfer window, the Red Devils are reportedly interested in signing Callum Wilson, Jadon Sancho, and James Maddison ahead of next season.

There are currently just two senior strikers at Old Trafford, Marcus Rashford and Anthony Martial, and the latter has missed the last two games with a knock.

With Solskjaer just one injury away from a crisis up front, reports claim his attentions have already turned to Bournemouth’s Wilson.

The 27-year-old England international already has three goals this season and his stock continues to rise.


Pochettino will stay at Tottenham for a 'very, very long time', claims Ardiles


Chelsea beaten by Valencia at home, Liverpool swept aside by Napoli, plus more

Meanwhile, ESPN also reports that Man United will step up their bid to sign long-term target Sancho from Borussia Dortmund, despite the 19-year-old recently signing a new contract.

And it is understood the Red Devils will be knocking on Leicester’s door again next summer, this time for star attacking midfielder Maddison.

Should they be successful in their pursuit of the English trio, we’ve taken a look at several ways Man United could line-up next season. 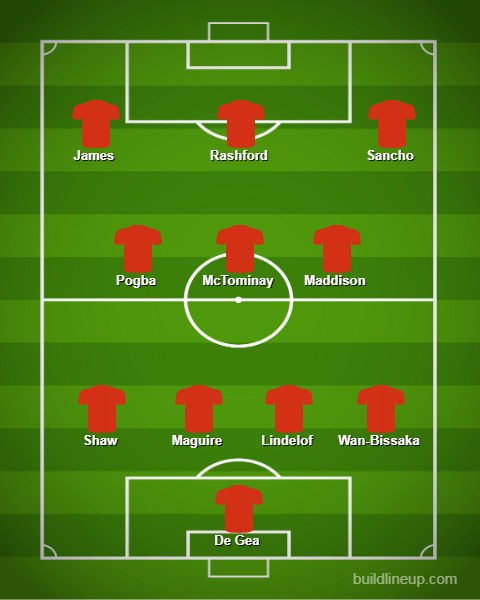 While Sancho and Maddison would walk into the side, it’s difficult to justify a place for Wilson in Manchester United’s strongest starting XI.

With Solskjaer’s dedication and commitment to youth, it’s hard to see Wilson being anything but third-choice up front.

Also, age aside, it’s highly debatable whether Wilson is a better-quality striker than Rashford or Martial.

Sancho’s potential arrival would likely come at the expense of Martial or Dan James, with Jesse Lingard and Juan Mata at risk of dropping out of the fold entirely.

Solskjaer likes to rotate between a 4-3-3 formation and a 4-2-3-1 shape, and the latter could see Maddison pushed into a more advanced No. 10 role, with Rashford utilised on the wing to accommodate Martial.

Still, though, no room for Wilson.

Bournemouth are one of the few teams who still operate with a traditional 4-4-2 formation – and it helps Wilson thrive.

The leg-work of Josh King allows for Wilson to focus all his energy on getting into goalscoring areas, hence why he is so prolific for the Cherries.

Perhaps Solskjaer is plotting a dramatic change in formation?

Also, with continued speculation around the future of Paul Pogba, Maddison could represent a direct replacement for the Frenchman as a box-to-box midfielder, rather than a No. 10.

Saturday is GameDay on talkSPORT and talkSPORT 2 as we become your go to destination for all the Premier League action.

We’ll bring you LIVE commentary of Premier League games across all three time slots on Saturday – 12.30pm, 3pm and 5.30pm – delivering award-winning coverage to more GameDay listeners than ever.

When is the Europa League draw? Date and time, how to watch and all qualified teams for last 32

Xhaka: We were scared