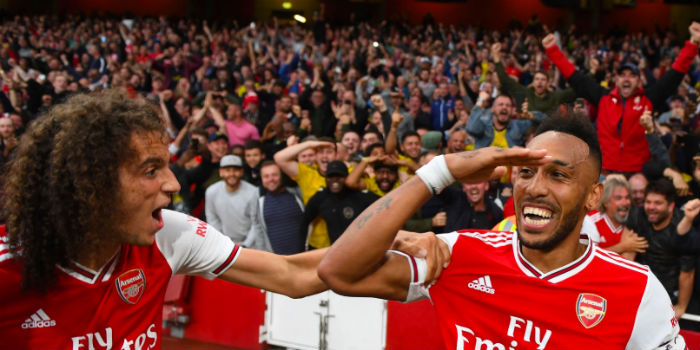 Unai Emery says he likes the anger Matteo Guendouzi transmits when he’s not selected because he knows when the Frenchman does play he’ll get total commitment.

As was the case against Sp*rs three weeks ago, the France midfielder again inspired Arsenal to bounce back from a two-goal deficit as we beat Aston Villa 3-2 despite having 10 men for 49 minutes.

Having provided a stunning assist for Pierre-Emerick Aubameyang in the North London derby, this time Guendouzi won a penalty that Nicolas Pepe scored to level things 1-1. The 20-year-old went on to hit the post with a long-range effort as he roused the Emirates with a rip-roaring performance that drove his teammates to victory.

After the game, Emery was asked about the youngster’s attitude.

“With Matteo, last year when he came here he progressed and he is progressing,” said Emery.

“Really I like that spirit he has, he has talent but above all his attitude, his energy, his commitment and his behaviour.

“He’s one player who is angry when he is not playing but I like that.

“I like that player because when they are angry they are asking you to play, when you decide that they play today they know they have a commitment to give what you need and he is one player, he is improving.

“I want to be calm with him, he is humble and continuing improving and growing up with us.”