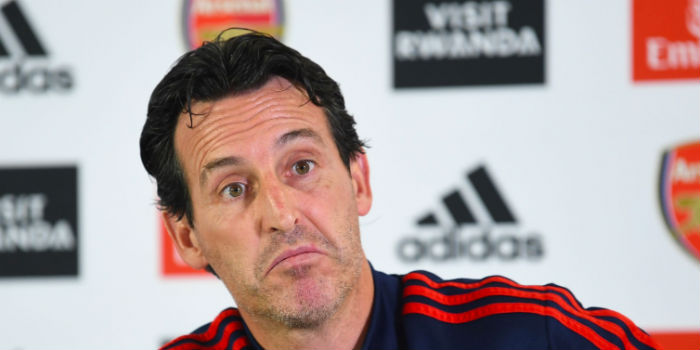 Unai Emery says Arsenal are ready for their upcoming rush of fixtures and can take confidence from the fact they sit third in the Premier League even though his players flattered to deceive in their last game – the 1-0 win over Bournemouth.

Monday’s game at Sheffield United kicks off a run of seven games in 19 days for the Gunners and an opportunity to make headway on both domestic and European fronts.

Asked if his squad is ready for the challenges that lie ahead, the Spaniard said: “We have players, they are going to be playing seven matches in three weeks, they were playing with the national team also and a lot of players had two matches in five days.

“Our players – every player – is prepared to play a lot of matches and when we decided how we can do our squad for this season, we were thinking also to achieve and to have different players and two players in general for each position in the squad, for us to use them when we are taking some injuries or when we are playing a lot of matches, like we are going to play now.”

He added: “Now we are in the Premier League, the first and most important competition for us and we are third in the table. For Monday, it’s another big challenge for us to keep that position and we know that to keep that position we need to do a strong 90 minutes, looking for the best performance and keeping the three points for us.

“Really, every player is in this way. For example, the last match we played, against Bournemouth, we found in the second half in some moments that important three points we were playing for and some times we felt a little anxiety for that. But really, we were very happy to be finishing with the three points and we are also knowing that we can improve and we can manage better playing at home, playing away with our tactical issues on the pitch.

“The players finished the last match with some doubt because in the second half we didn’t finish like we wanted, controlling the match. That two weeks we were now with the international team break, I think has been very good to start again with that third position, for our confidence and knowing we can do better. But being competitive, I think we are getting better little-by-little and we are looking to play the best we possibly can with our tactical plan for each match.”

Emery also played down talk of where the club will finish in the league, insisting that it’s too early to be analysing the threat of other clubs. Instead, he called on his players to focus on the job at hand; beating the Blades on their own patch.

“Our target is on Monday and on Monday we are going to play for three points, away against Sheffield United,” he said.

“We have two teams in front of us and we have other teams behind us with only one point difference with some of them. On Monday, we will need to continue improving in our way and the most important thing is to win the three points. But also, to do one step ahead, improving the things that we will need for the next matches. Our challenge is on Monday because it’s the next game.”

Looking for a good omen ahead of Monday’s match? Arsenal have won their last seven Premier League matches in Yorkshire, the longest winning run by an away side in the county in top-flight history. We’ve also only lost once in our last 11 fixtures played on a Monday.

The post Emery: We can cope with busy schedule appeared first on Arseblog News – the Arsenal news site.

Sheaf continues to impress on loan at Doncaster