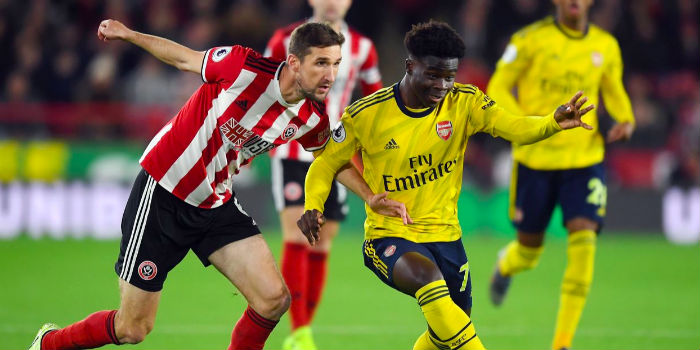 Lys Mousset’s close-range strike was enough for Sheffield United to condemn Unai Emery’s Arsenal to a second league defeat of the season as the Gunners delivered another limp performance on the road.

Despite ending the match with four attackers on the pitch, the visitors struggled to create clear cut chances and paid the price for their defensive shortcomings as the Blades settled things from a first half corner.

Unai Emery made only one change from the side that started the 1-0 win over Bournemouth, bringing in Joe Willock for Dani Ceballos in the centre of midfield. Kieran Tierney, yet to feature in the Premier League, had to settle for a place on the bench as did the returning Alex Lacazette who was deemed fit after a month out with an ankle problem.

If Arsenal fans were hoping for the side to loosen up after the tense and turgid 1-0 win over Bournemouth last time out, they were to be sorely disappointed in a drab first half that saw the Blades, for the most part, comfortably keep us at arm’s length before taking advantage of poor defending at a set piece.

Both sides shared a flurry of corners as the game started at high pace but things settled down soon enough. As usual, we looked to build from the back, passively working the ball across our defensive line before trying to probe via Kolasinac, Chambers, Saka and Pepe in wide positions.

The Ivorian was by far our most influential player before the break. He started with an early teasing ball across the box that Aubameyang failed to read and later, on 21 minutes, should have given us the lead only to scuff a Kolasinac cross wide. To be fair to the Ivorian he’d done brilliantly well to start the move in our right-back position as we sprung an eye-catching counter.

Any thoughts that the Gunners were building to a crescendo were misplaced. The home side looked very comfortable and worked numerous crossing opportunities of their own. They are a better side than Stoke, but they’re cut from the same cloth. The Blades are packed with players who look like they’ve been assembled by a butcher and they obviously relish a physical battle.

On 30 minutes they overloaded our back post for a corner, duly won a knockdown and Lys Mousset was left free to poke home from a couple of yards out. It was terrible defending. Bramall Lane erupted. (1-0)

We dominated possession for the rest of the half but the closest we came to hitting the net was a speculative rising effort from Xhaka that Dean Henderson tipped wide for a corner. From the resulting corner, the Swiss then looped a header over.

Prior to that, Saka had gone in the book for what Mike Dean adjudged to be a dive in the box. There was definitely contact on the youngster’s ankle, perhaps not enough for a penalty, but it was very harsh flashing a yellow. Freddie Ljungberg was so incensed by the decision he too was cautioned for his complaints in the dugout.

Emery switched Ceballos in for Willock at the start of the second half but it was more of the same dawdling tripe from the Gunners.

Saka’s dinked cross to Ceballos should have been despatched by the Spaniard but his limp effort was half blocked and comfortably scooped up by Henderson. At the other end, John Fleck rippled the outside of Leno’s net with a rasping drive from the corner of the box. The Scot then fumbled a shot from the same player as he again tried his luck from range. Luckily, he was up quickly to claim the loose ball.

Into the final 20 minutes and Lacazette came on for Xhaka as we desperately looked for a cutting edge in attack. The Frenchman went through the middle, Aubameyang moved left and Saka sat deeper.

Strength and determination from Lacazette did earn us a free-kick 25 yards from goal. Pepe hit a whipped left foot effort but Henderson was smart to the danger. Inside a minute, he tried his luck again but couldn’t find the necessary bend on the ball. Soon after he was hauled off as Gabriel Martinelli came on.

For all our possession, the only efforts of note heading into the closing stages were a header over the bar by Kolasinac who’d darted off the left flank and a cross shot from Chambers that deflected for a corner. That aside, it was horrible to watch from a Gunners perspective.

Luiz: I take pleasure from helping others