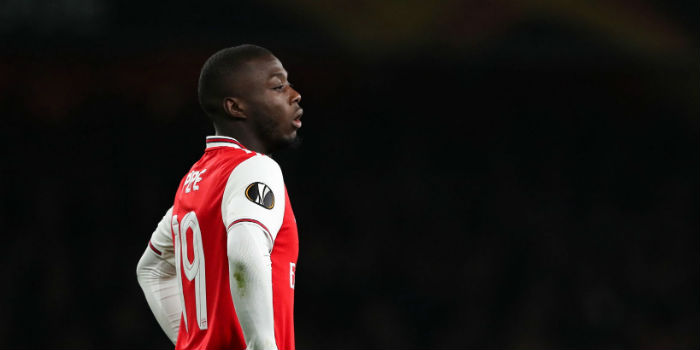 Nicolas Pepe says his stunted pre-season has taken a toll on his start to life at Arsenal but after last night’s match-winning brace against Vitoria, he’s confident that he’s getting back to his best.

The Gunners completed the club record £72 million signing of the Ivorian on 1 August, three weeks after his country were knocked out of the African Cup of Nations, and he was quickly tasked with making an impact off the bench in our opening game of the season at Newcastle.

Facing the cameras after his two stunning free-kicks downed Portuguese side Vitoria 3-2 at the Emirates, Pepe admitted that the way his summer panned out has left him playing catch-up on the physical front.

“I am not at my best physically because I didn’t have a proper pre-season like the others,” he told Arsenal.com.

“I was at the African Nations Cup. I started little by little and the manager knew about it. I am trying to work hard to be stronger physically to perform well.”

Pepe also stressed that he was pleased that Unai Emery has been patient with him while he adapts to his new surroundings and the style of play in England.

“The manager trusts me,” he went on, “even if I hadn’t been decisive for a while, I always had the manager’s trust. It is always important to have the manager’s faith.

“Of course (I knew it would be hard moving to England). It is a league totally different to Ligue 1, with a different intensity.

“For me, I had to adapt quickly because expectations were high. Unfortunately, it is not what I did at the beginning but I have always had the manager’s trust and the players have supported me.

“I keep working hard to perform well and adapt to the Premier League.”

The 24-year-old also opened up on his relationship with fellow attackers Pierre-Emerick Aubameyang and Alex Lacazette, both of whom were very excited about his acquisition in the summer.

“We have played very little together,” he added. “But we get on well, we all speak French. For us, it is easy to understand each other. I hope we will play more together.

“As soon as I arrived they helped me. I talked a lot to them. Matteo (Guendouzi) too.

“I also manage to talk to the other players because it is important to learn the language to communicate with everyone.”

The post Pepe: Lack of pre-season has taken a toll appeared first on Arseblog News – the Arsenal news site.

Arsenal 1-0 Bournemouth: By the numbers