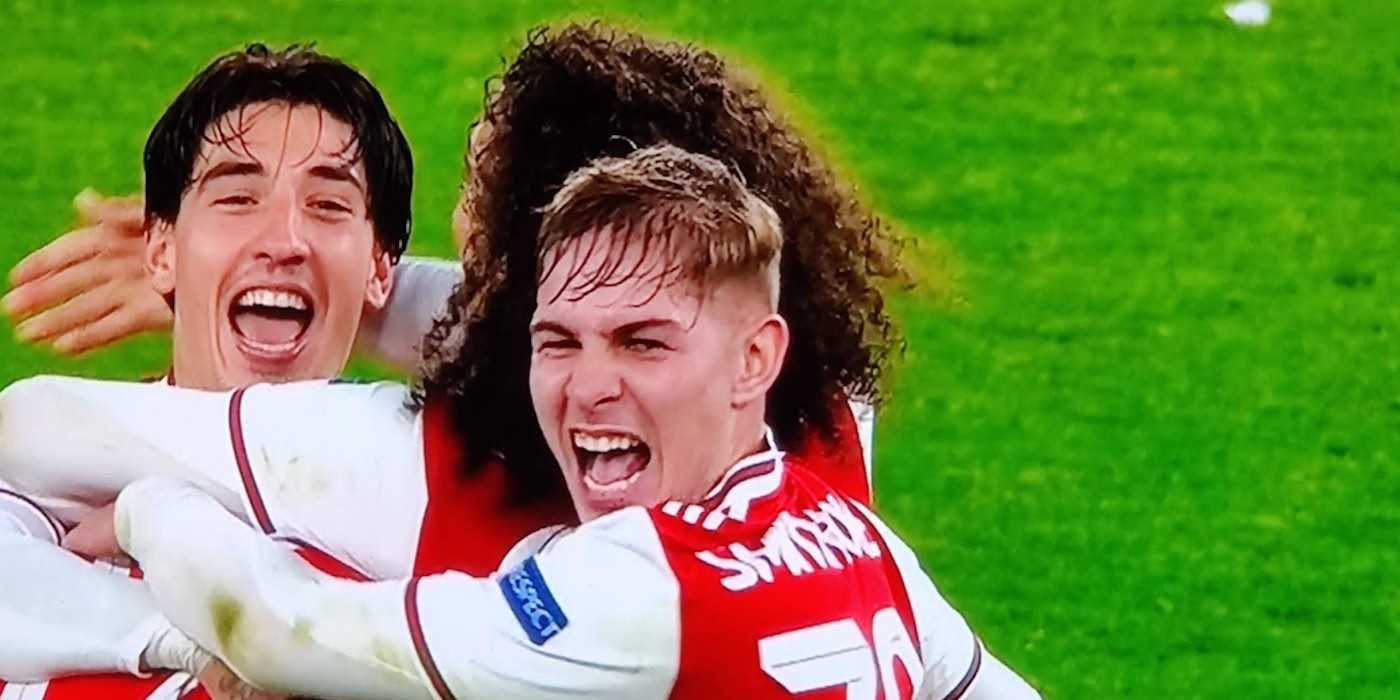 Arsenal came from behind to beat Vitoria 3-2 at the Emirates this evening, with substitute Nicolas Pepe rescuing the win with two incredible free kicks.

As expected, Unai Emery rang the changes, although there was no still no place for Mesut Ozil in the squad.

The visitors had the first sight of goal, Almeida turning Holding but his 4th minute shot was weak and easy for Martinez. It was a warning sign, and in the 9th minute former Sp*rs player Marcus Edwards put Vitoria ahead with a smart finish between the legs of the Arsenal keeper. 0-1.

Lacazette had a chance a minute later but pulled his shot wide, and the Gunners appeared nervy and unable to keep hold of the ball. Smith Rowe showed nice skill from a Lacazette pass but his shot was blocked, but most of the danger in the first 20 minutes came from the Portuguese outfit.

Martinelli was energetic, and it was the Brazilian who brought the sides level, heading in a Tierney cross in the 32nd minute as he kept up his amazing goalscoring record at the Emirates. 1-1.

Sadly, the lead only lasted a couple of minute as Vitoria took advantage of a heavy touch from Maitland-Niles in midfield. They drove forward, hit the post, and reacted first to the rebound as Duarte made it 1-2.

Martinelli dragged a shot wide as Arsenal looked to respond again, but went in behind at the break. A double-change at half-time ensued, with Dani Ceballos and Matteo Guendouzi coming on for Willock and Maitland-Niles.

Early in the second period Mustafi headed wide, and inside 60 seconds Vitoria forced Martinez into two saves, one at his near post and a header which went straight at him. Smith Rowe should have done better with a chance from close range after Tierney did well, but he shanked it wide, and Arsenal’s desperation was evident when Lacazette resorted to some silly playacting to try and get an opponent sent off.

Arsenal huffed and puffed to little effect, Martinelli stood out as his effort set him apart from the rest, and in the 75th minute Emery made his final change, bringing on Nicolas Pepe for the just booked Lacazette.

Vitoria had taken 13 shots to the Gunners 10 at that point, but a free kick conceded 25 yards out provided Emery’s team with the equaliser. Pepe stepped up to take it and curled home an excellent shot for his second Arsenal goal to make it 2-2.

It was a goal the Ivorian really needed and it came at an important time. Straight away Vitoria shot wide, and at the other end a great pass by Mustafi set Bellerin free and from his pass Martinelli saw a goalbound effort saved by the keeper.

Another free kick from almost the same position he scored from saw Pepe deliver a great ball to Holding whose header was well saved by the keeper.

As the game went into three minutes of injury time, Guendouzi’s surging drive won a free kick just outside the D, a chance for Arsenal to win it at the death. Pepe stepped up again, and duly obliged – smashing home a free kick over the wall and into the top corner. 3-2.

It wasn’t a great performance from Arsenal, but what a night it was for Pepe who properly announced himself as an Arsenal player after his £72m move from Lille in the summer.

Now for Palace on Sunday.

Emery: My message is for everyone at Arsenal to stay calm