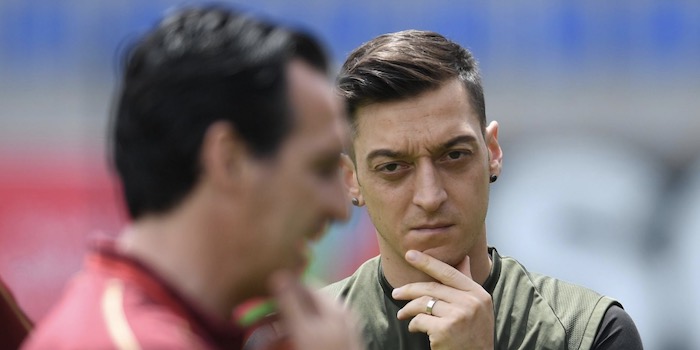 Unai Emery says that Mesut Ozil’s absence from the Arsenal squad is not just a decision he’s made on his own, but part of an overriding club strategy.

The last time the 31 year old was picked was on September 24th when he played 71 minutes against Nottingham Forest in the Carabao Cup.

Despite being one of Emery’s five captains, he hasn’t been in the squad since and the Spaniard has deflected questions about his absence since.

However, ahead of the Premier League clash with Crystal Palace, the Arsenal boss has admitted this is part of a wider decision making process.

Speaking about the Ozil situation, he said, “Here we have one agreed strategy as a club and a team. Because the most important thing is the club, the team and finding a performance.

“Previously we were all speaking between us to take that decision. I know all the supporters want to know something, but now is not the moment.”

It seems to suggest that there’s little chance of Ozil being involved against Palace, and while the Gunners struggle for fluency and creativity, this ‘club strategy’ will remain open to question.

Even if he did start, after just 71 minutes of Premier League football this season, it’s hard to imagine he’s anywhere near match fit.

The whole thing is an absolute mess, and you have to wonder if Emery, under pressure, is attempting to make it seem like this isn’t simply on him after the dispute between the two took a personal turn over the last few days.

No new injuries as Gunners prepare for Wolves

Agent: Torreira unhappy with how he’s being used by Unai Emery