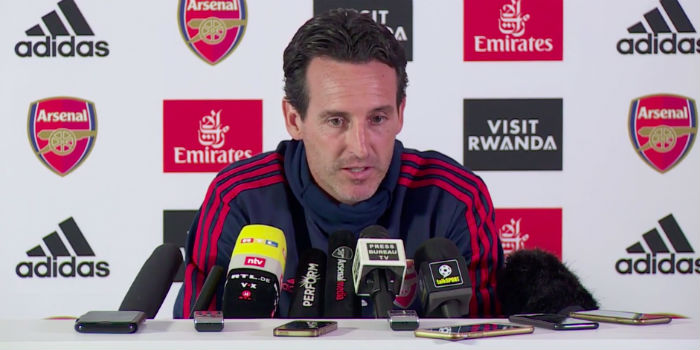 Arsenal’s last Premier League encounter saw them go 2-0 up against Crystal Palace inside the first ten minutes, but end up drawing the game 2-2.

On Wednesday against Liverpool the Gunners were 3-1 and 4-2 ahead at Anfield, but lost to Liverpool in a penalty shoot-out. And earlier in the season, Unai Emery’s side were 2-0 over Watford, and were lucky in the end to cling onto a point at Vicarage Road.

The Arsenal boss says that he’s working to improve the team defensively and admits it’s not normal to throw away commanding positions like that.

Speaking to the press ahead of Saturday’s clash with Wolves, he said, “Yes the circumstance happened and different moments in the 90 minutes changed the match.

“We are also working to improve defensively, when we are winning 2-0 it’s not normal to draw.

“We deserved to win, but OK we can also speak about the referee’s decisions last week, but that match has finished now, and we are going to focus on tomorrow, on improving.

“It’s a different team, they also have very good players, and also they are strong offensively.

“And I hope we can manage the 90 minutes imposing our gameplan. This is a new challenge for us and I am excited to play tomorrow and if you ask me where do I want to play my matches?

“At home, at home with our supporters because we feel strong with them.”

Arsenal have yet to lose at home in the league this season, winning three and drawing two.

Ljungberg in the dark about what’s next