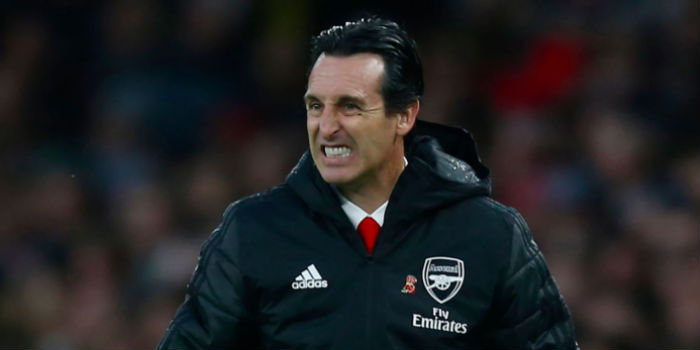 Unai Emery was quick to deflect suggestions that his job is under threat even though he watched his Arsenal side drop more points from a winning position on home turf.

The Gunners led at the break against Wolves courtesy of Pierre-Emerick Aubameyang’s calm finish on 21 minutes but Raul Jimenez’s header 14 minutes from time ensured the visitors earned a deserved 1-1 draw.

The result was another blow for Arsenal’s hopes of finishing in the top four. Emery knows he has to secure qualification to the Champions League come the end of the season if he’s to have any chance of having his contract extended for a third year but right now his side look bereft of confidence every time they take to the pitch.

Asked in his post-game press conference whether his position is at risk, Emery replied: “I am very demanding of myself.

“I feel every time my responsibility to work and to come back from the result with the next matches.”

Pressed on his contract, he went on: “We are speaking about how we can improve and take the good way, and also being calm in the dressing room with the players to achieve performances individually and collectively. These are the conversations at this time.”

Prior to the last Interlull, when the Gunners were in third position, managing director Vinai Venkatesham explained that the club hierarchy were pleased with Emery’s work. Since then, the Gunners have won just once in a five games – against Vitoria – and dropped to fifth in the Premier League table.

Of particular concern is the way we keep surrendering advantages. Against Palace we raced to 2-0 before being pegged back and at Anfield in the Carabao Cup on Wednesday we couldn’t hold onto leads at 3-1, 4-2 and 5-4. Today, it was much the same.

For all that, Emery tried to put a positive spin on things. “We worked on different tactical situations well today,” he said.

“We didn’t concede a lot of chances on the transition. We created some chances to score the second but we needed to be more efficient in those actions.

“When we were winning 1-0 we knew in one moment they could score and they did. But we controlled the match a lot like we prepared.

“Then they equalised and we started to get into their box. We didn’t create big chances and we were closer to the second goal, but we didn’t do that.

“The result is a bad result, but tactically I think we worked how we wanted. The players tried, they worked, so now we need to finish that match and focus on the next one.”

Personally, if you drop points at home from a winning position it suggests to us that tactically things haven’t quite worked out. But what do we know?

Emery confident on Pepe, price-tag not a consideration

Xhaka releases statement: Let’s get back to a place of mutual respect