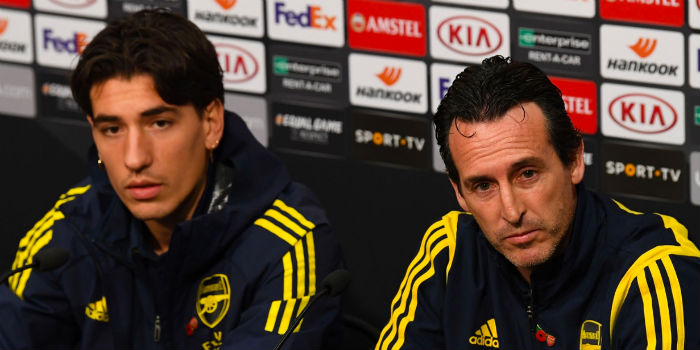 Hector Bellerin says Granit Xhaka still has the backing of his teammates despite being stripped of the captain’s armband, which has now been handed to Pierre-Emerick Aubameyang.

The Swiss midfielder has paid the price for his reaction to being jeered by Arsenal fans during the 2-2 draw with Crystal Palace with his half-arsed apology seemingly not enough to rehabilitate his reputation in the eyes of the club hierarchy.

The 27-year-old midfielder was spotted in training on Tuesday morning but has, for the third game in a row, been left out of the squad.

Asked about the situation ahead of Wednesday’s Europa League clash with Vitoria, Hector Bellerin, newly promoted to vice-captain, said: “I think sometimes it’s hard to deal with your feelings.

“He knows he made a mistake but as a dressing room we all have to be together.

“These things happen and that’s it, we all back him. He’s playing his part now and we respect the players.

“We respect the decision of the coach and the club [to take away the captaincy].

“For us, it’s just to give him our love and care and for us, he is one of us, so we’re just helping him get through it as well.”

Hector was also asked about Arsenal’s recent downturn in form and what they are trying to do to turn things around.

“It’s been a tough couple of weeks in terms of the results but I always say that the good thing with football and at a club like Arsenal is that you have the chance to redeem yourself every two or three days,” he reflected.

“So we’ve been analysing and working hard in these couple of days that we’ve had and tomorrow we’re looking to get back to winning ways and to get a positive atmosphere back into the dressing room.

“That’s the message. We keep working, we keep trying hard to do our best and in this competition, we want to go far in it and it’s important that we keep our heads straight.”

Vitoria proved to be tricky opponents two weeks ago at the Emirates, twice taking the lead before substitute Nicolas Pepe rescued the Gunners with two brilliant free-kicks.

Bellerin says the quality of the Portuguese came as no surprise.

“We knew they were a team with a lot of quality and very physical players, with quick and creative players at the top,” he said.

“We analysed the last few games they played, and knew it wouldn’t be easy. It was harder than some people expected, but we knew it and not every game will be easy.

“It was a hard game, and Pepe won it at the end with the free kick. Obviously we play away from home, they will have the home crowd, so we expect it to be harder but we are ready.”

The post Bellerin: Xhaka is still one of us appeared first on Arseblog News – the Arsenal news site.

Tierney: Martinelli is good at everything