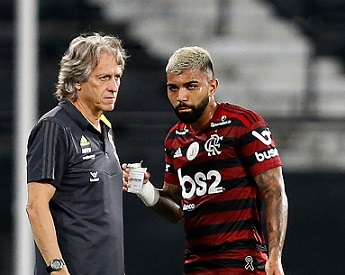 Flamengo maintained their 8-point advantage at the top of Brasileirão this midweek thanks to a last-gasp 1-0 win at Rio de Janeiro rivals Botafogo on Thursday evening.

Teenage substitute Lincoln scored the winning goal in the 89th minute for Jesus’ men, but many of the headlines centred on the Portuguese coach’s criticism of Flamengo’s opponents and a confrontation with Botafogo’s defender Joel Carli.

The leaders were frustrated during a goalless first half, during which Botafogo committed several fouls and prevented Fla from finding their rhythm. The balance appeared to shift in Flamengo’ favour when the hosts had winger Luiz Fernando sent off for a second bookable offence ten minutes into the second period.

Mengão spent the rest of the game pushing for the breakthrough but had to wait until the dying stages for one of Jesus’ introductions to prove the match-winner. 18-year-old Lincoln met Bruno Henrique’s cross from the left and converted from close-range for his second goal of the season and a potentially vital three points for Flamengo.

“Today was a difficult game,” Jesus admitted after the final whistle. “It was more difficult in the first half because there was a manhunt for Flamengo players. To stop a team you must have technical and tactical plans. This is not the way to stop a team; this is not how Botafogo will get out of the relegation zone. They wanted to intimidate our players. They failed. We knew we would get the goal.

“It’s an important victory, in a stadium that is difficult. Flamengo hasn’t won here in ten years. It’s an historical rival who have had great players, such as Garrincha and Amarildo. We created the goal with the introduction of Lincoln and some tactical changes. The players managed to overcome the difficulties. We did not win in style, but we earned the three points. We beat a team that never wanted to win, just wanted to make fouls and only know how to kick.”

Flamengo lead the standings by eight points with just seven matches left to play, but a victory in this local derby felt vital given the difficult run-in faced by Jesus’ side, who also contest the Copa Libertadores final against River Plate later this month. Flamengo’s three remaining away fixtures see them travel to Gremio (4th), in-form champions Palmeiras (2nd) and Santos (3rd).

“Time is getting shorter and it is normal for anxiety to rise,” the Portuguese boss admitted. “We are nearing the end and we want to end the journey as champions. This affects the crowd, the players, the coach, but we have experience. We try to overcome this with our confidence and pleasure to play. We tried to do that, but they (Botafogo) wouldn't let us play. But not with tactical organisation, but because they only wanted to kick.”

Jesus: This is not football

Jesus’ criticism of Botafogo’s aggressive tactics were brought into sharper focus following his on-field altercation with one of the opposing centre-backs, Joel Carli. At the end of the match, the veteran Portuguese manager entered the field to celebrate with his players and approached the Argentine, whose reaction to Jesus’ words led to him being restrained by teammates.

“In the first twenty minutes, our doctor had to check on Gabigol five times,” Jesus said. “They were targeting Gabigol and Bruno Henrique. The centre-backs of Botafogo wanted to intimidate and hurt. This is not football; this is not how I teach my players to behave. They wanted Gabigol to lose control but he’s growing emotionally like a great player. When the game was over I told the Botafogo player it wasn’t worth kicking as much as they lost anyway. I hope this will serve as an example because this is not football.”

Jesus now prepares his charges for Sunday’s home clash with Bahia, but the former Braga, Benfica and Sporting coach will not be on the sidelines at the Maracanã. The 65-year-old received a yellow card during the Botafogo match, making it his third caution of the season and incurring a suspension. Assistant coach João de Deus will guide the team against Bahia.

ENGLAND: “I was happy for an hour” Mourinho reflects on debut Spurs win