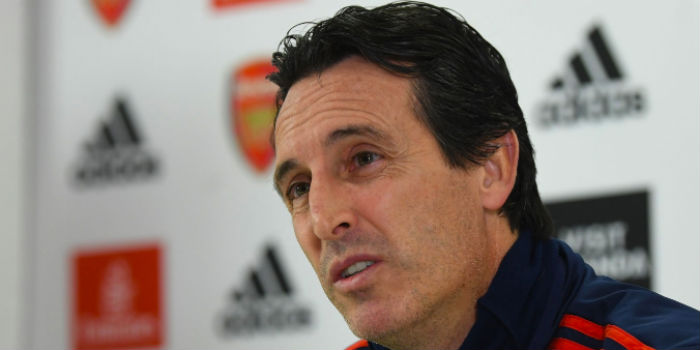 Unai Emery says Arsenal need to beat Leicester tomorrow evening but urged his players not to allow the pressure of the occasion to get to them.

Since the last international break, the Gunners have dropped from third to fifth in the Premier League, paying the price for dropped points in consecutive games against Sheffield United, Crystal Palace and Wolves.

Defeat at the King Power would see Brendan Rodgers’ side open a nine-point gap on us and raise further questions about the Spaniard’s ability to achieve the club’s aim of getting back in the Champions League.

Speaking at his pre-game press conference, he was under no illusions about the importance of the occasion.

“Must-win? Yes,” agreed Emery. “We need to win and it’s very important for us tomorrow.

“But our mentality is every time to play first, using our best structure and organisation to be strong and also our individual players to use their quality to win. But in our mind, for each match it is only to win.”

Asked about the challenge posed by Leicester, who have been flying this season under Rodgers, Emery went on, “Brendan Rodgers is a very good manager and he is doing very good work, as he did here in England with Swansea, with Liverpool and also Glasgow Celtic.

“He arrived here last year and his team was improving progressively and this year I think it’s no surprise for me.

“We are taking, as a good moment, sometimes as a bad result, but the most important is to keep the balance.

“I think as a coach I learned that, in my mind to be with that balance when we win, when we lose. For me it’s not to play tomorrow under pressure, it’s to play under a very big opportunity to change that.

“We are in the balance, but we when you are a team like Arsenal we need to win more than draw or lose.”

Emery also defended his players from the harsh criticism that has come their way from fans and the media alike. There’s no hiding the fact that dropped points against Wolves and Crystal Palace, both from winning positions, has been very damaging to confidence, but the Spaniard was quick to point out both opponents proved tricky last year as well.

“I think at home we are faring well but not with the performance as we will do for the next matches,” he said.

“Those two results, two draws, weren’t the best results also. Last year, those two teams also gave us a lot of problems at home and we took only one point against those two teams.

“But I was speaking with the players this week about how is our next step to improve. And it’s clear, there are two ways: play better with the ball, play with more confidence with our style, and take more responsibility on the pitch.

“My responsibility is the first but also I give them because they are on the pitch to take that responsibility to play better. And then is for our defensive structure to be strong and get better defensively is our first challenge tomorrow.

“Last year, we were looking for that improvement during the season and we achieved it in a lot of moments – and I know now we can do better and we will do better.”

Emery: Pepe’s adaptation is slower than we wanted