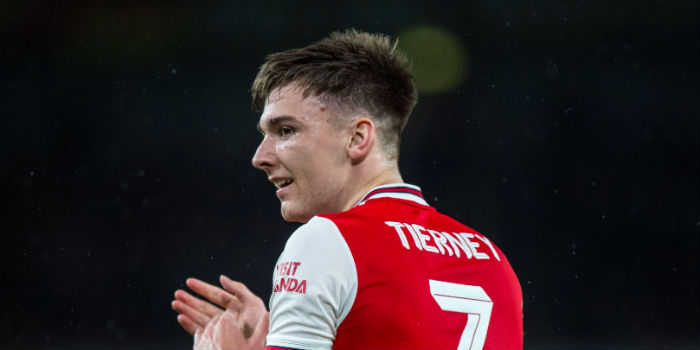 Brendan Rodgers has revealed that Arsenal tried to sign Kieran Tierney from Celtic in the summer of 2016 just after he’d taken over as manager of the club.

After a conversation with the Scotland international the left-back, a boyhood Bhoys fan, was persuaded to sign a new contract.

Rodgers went on to win the treble in consecutive seasons with Celtic and added another Scottish League Cup before quitting the club to become Leicester’s new boss.

Rodgers will be reunited with Tierney on Saturday afternoon when the Gunners visit the King Power stadium and is predicting big things of his former charge now that he too has crossed the border.

“He’s gone into Arsenal, a really competitive team and a huge club, and it takes that little bit of time to settle,” said Rodgers.

“He’s gone from one big city to another, leaving behind his family and friends in Glasgow, so it’s been a period of adaptation for him. I’ve got no doubt he will do very, very well in his time.”

Reflecting on why Tierney so caught his eye, he went on: “As a player, in the first week working with him, I could see after two or three days why there was a lot of clamour for him.

“From that moment he was absolutely brilliant for me. He became stronger, more powerful, very aggressive in his game.

“He worked hard every single day but he was also a strong boy mentally, and he had a lot of good mentors. Scott Brown was an incredible captain for me, and he (Tierney) took on that mantle to try and be like him.

“Every day in training he was very focused on becoming better, and obviously he loved Celtic as a club. He supported the club, and that gave him that extra one per cent every time he played.

“So as a player he was fantastic, and he captained the team for me on a few occasions as well, but also a great boy, very humble, just wanting to be the very best he can be.”

The Scotsman reports that Celtic’s latest financial reports show that Arsenal ended up shelling out £25 million for Tierney this summer. We may well have got him cheaper three years ago had he not been persuaded to stay by Rodgers.

“Peter (Lawwell, chief executive) had said to me – and he was very honest about it – there was a possibility of Kieran going to Arsenal, but there was no rush for Celtic to sell him, and there was a big offer at the time,” revealed Rodgers.

“So I spoke to Kieran, told him I wanted him to stay, to be a big part of what we were doing, and between him and the club, a new deal was agreed, and he stayed until he went in the summer.”

Chambers: We need to work hard and stay positive