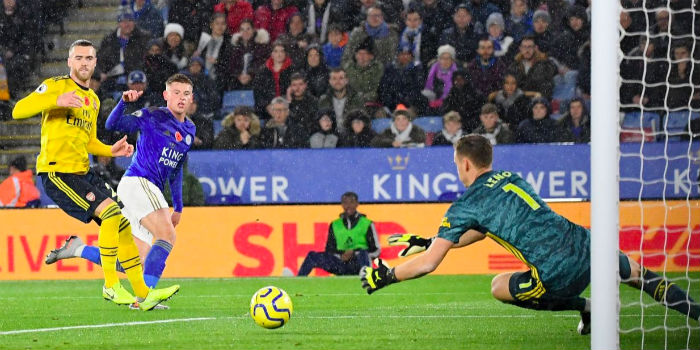 Second half goals by Jamie Vardy and James Maddison condemned Arsenal to a third Premier League defeat of the season as Unai Emery’s men went down 2-0 to Leicester at the King Power.

The Gunners gave as good as they got before the deadlock was broken by Vardy on 68 minutes but with the wind in their sails, the home side never looked back.

Maddison’s fine strike seven minutes later made sure of the win for the Foxes who climb to second in the table. Arsenal now sit sixth, level on points with Sheffield United and eight behind City who play Liverpool tomorrow.

After the rotten football served up on Wednesday night, Arsenal were much improved in the first half at the King Power. We looked more balanced in possession; Ozil providing a much-missed link to the strikers from his central berth. That said, we still conceded chances as the home side, flush with attacking talent of their own, probed down the flanks.

Twice in the early stages, Tielemans looked to feed Vardy. The first time the Belgian’s pass was overhit, the second time the former England striker’s first touch deserted him.

In between, we were incredibly lucky not to concede a penalty. When Soyuncu went down at the far post trying to reach a Maddison free-kick it looked innocuous enough. The replay showed a clear tug by Guendouzi. Arsenal fans held their breath awaiting VAR to instruct a penalty. It didn’t. Play resumed.

Back we came. A sweeping move saw us move the ball from the left flank to the right and should have ended with a goal for Lacazette but the Frenchman curled wide.

Two further mishit efforts suggested the striker had forgotten how to kick a football. His body language wasn’t great.

As the half wore on, Leicester began to dominate as Barnes, Perez, Maddison and Tielemans came to the fore. They upped the pace, penned us in and repeatedly forced us into hurried, aimless clearances.

Crosses from the right were a constant threat; Perez on a number of occasions whipping the ball with pace, teasing Leno. Were it not for Chambers, Vardy might have tapped home on 32 minutes.

Bellerin making his first start in the Premier League since Janaury had a tough time in defence but he was a useful outlet in attack. A better pass from Lacazette might have presented the Spaniard with an easy chance but he couldn’t reach the ball. Not long after a cross of his own was deflected just over the bar.

In the dying stages, Maddison went close with a free-kick after being upended by Torreira outside the box and Barnes headed wide after misjudging the flight of a Chilwell cross.

The opening 10 minutes were ridiculously open as both sides pushed forward leaving their respective defences open to the counter-attack.

Pereira’s cutback was deflected into the path of Ndidi who opened his body and sidefooted against the bar. A big missed chance.

At the other end, Luiz stole the ball and charged forward before curling wide with his left foot. Bellerin did similar, his right foot effort flying just over the bar.

Another flowing move ended with Aubameyang side-footing past Schmeichel. He thought he’d broken the deadlock but the flag went up. A quick VAR check. Correct decision.

Luiz picked out Aubameyang with a fine clipped pass. Pereira just cleared before our captain could get his shot off. Back came Leicester, substitute Gray tested Leno’s handling with a low rasping shot from outside the box. The German gathered cleanly.

Our keeper didn’t have a chance two minutes later though as the home side finally worked space for Vardy to break the deadlock. The striker popped up at the back post to tuck home after intricate play had unpicked the Arsenal defence. He always scores against us and it’s very annoying. (1-0)

Vardy nearly doubled the lead five minutes later but his powerful shot was beaten away by Leno. It didn’t matter, with 15 minutes later, the home side did get their second. Vardy laid off to Maddison whose first time shot flew through the legs of Bellerin inside Leno’s near post. Game over. (2-0)

Pepe and Willock replaced Holding and Torreira as Emery threw caution to the wind but we could barely get out of our half. The home side were toying with us. Heads in yellow shirts dropped. “Sacked in the morning,” sang the King Power, followed by a chorus of “You’re just a shit Arsene Wenger”.

Arsenal’s squad will now disperse for the Interlull. Whether Emery is still in charge when they return remains to be seen.

Emery: We are improving defensively, but our mentality is to be offensive

Ljungberg: I’m so pleased for Pepe