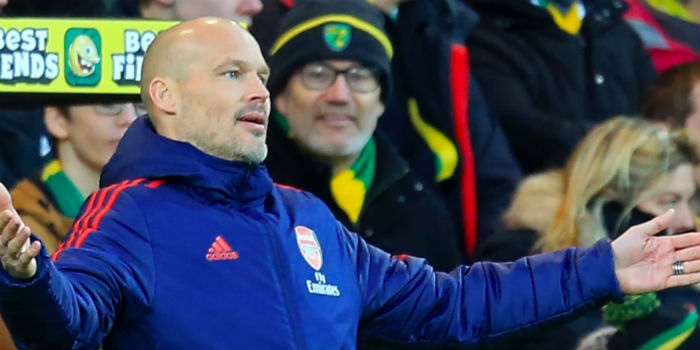 Freddie Ljungberg says Arsenal showed flashes of work in training during the opening stages against Norwich but he admits they still have much to improve defensively after stuttering to a 2-2 draw at Carrow Road.

The Swede was thankful for Pierre-Emerick Aubameyang’s cool head in front of goal – the Gabon striker netted twice – and a series of fine saves by goalkeeper Bernd Leno, who almost singlehandedly protected a point as the home side pushed for a winner.

After the game, the Gunners interim head coach tried to strike a positive note.

“We started the game really well, that’s how I want to play football,” he told Sky Sports.

“But we need to work on the transitions, we dominated and they break us too easily.

“In the beginning I saw a lot of things we worked on in training, but we need to score goals and take the lead.

“I want this club to do well, it is only winning that counts: I wanted to win the games so I am disappointed but I have also seen some positive things.”

Freddie also touched on Aubameyang’s first leveller; scored from the spot at the second time of asking. The striker’s initial effort was saved by Tim Krul only for VAR to rule that Norwich players had infringed on the box before it was taken.

“I think I had a heart-attack twice,” he said, “but from what I heard it was quite obvious, that’s what the results are for.

“The most important thing was for Aubameyang to have the mental strength to score the second penalty after missing the first one.”

The post Ljungberg: They broke through us too easily appeared first on Arseblog News – the Arsenal news site.

Willock: I’m delighted that Freddie is in charge