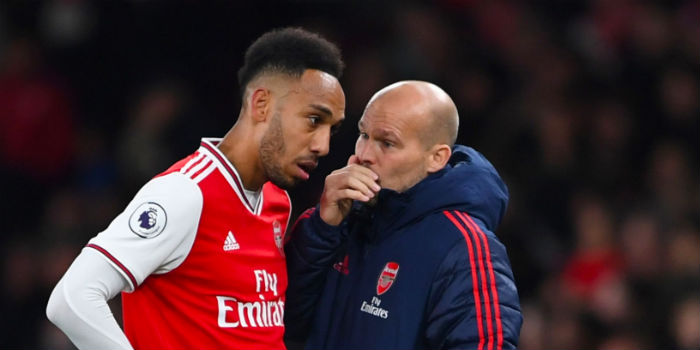 Pierre-Emerick Aubameyang says it’s “interesting” having Freddie Ljungberg in charge and says the interim head coach has the full support of the first team squad.

The Swede, handed the responsibility on Friday after the club decided to part ways with Unai, took charge of his first game on Sunday, overseeing the 2-2 draw with Norwich in which Aubameyang netted twice.

While the new man in charge hasn’t had long to assert his ideas, our club captain believes that Freddie’s pedigree as a player speaks for itself.

“Everybody is respectful of Freddie,” Aubameyang told Arsenal.com. “He played for Arsenal, he knows as a player how we feel. It’s interesting to have him.

“We had only one session with him, maybe two for those guys who didn’t play on Thursday. We will see this week what is going to happen. For me personally I think it’s good for us. He played for Arsenal and he has this in his heart.

“He can give us something special. He was part of the Invincibles – his career speaks for itself. We will try to follow him and give the best for him.”

It remains unclear how long Freddie, who was assisted by Academy Manager Per Mertesacker at Carrow Road, will be asked to oversee the first team. He’s only been working with the group for three months since stepping up from his role with the under-23s and is very much learning on the job.

The Gunners are said to be casting a wide net in their search for Emery’s long-term replacement with the bookies shortening their odds on names young and old, experienced and fresh on the scene.

One man who won’t be moving to the Emirates is Brendan Rodgers. The Leicester manager made interested parties aware of a release clause in his contract but has since made clear he’s very happy at the King Power. The former-Liverpool coach only returned to the Premier League eight and half months ago.

“I have a contract here until 2022 and thus far – and I know managers are losing their jobs – but the club have not indicated to me that they are going to sack me,” Rodgers told Sky Sports.

“I think they’re pretty happy with how we are working and like I said, I’m very happy, and I have no reason to look elsewhere.

“I think logic would tell you – I know in your job it’s not always logical, there’s gossip and speculation – but why would I want to leave Leicester City, at this moment in time.”