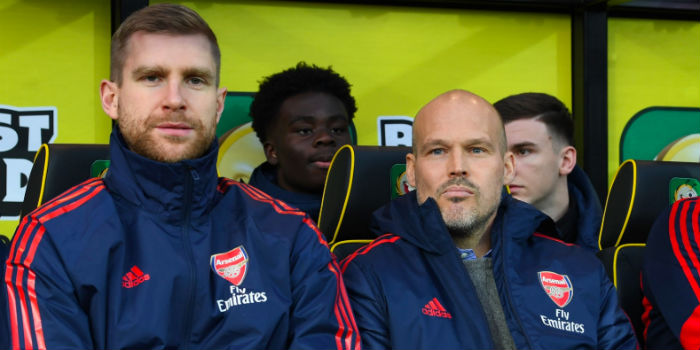 Freddie Ljungberg says he’ll look to keep things simple on the training ground while he’s in charge at Arsenal, in part because he has no time to implement wholesale changes.

The Gunners claimed a point at Carrow Road in the Swede’s first game in the dugout as interim head coach as Pierre-Emerick Aubameyang twice pegged back Norwich to secure a 2-2 draw.

The 42-year-old has been tasked with steadying the ship after Unai Emery was sacked on Friday following an abject run of results and performances. The club insists that they will take their time finding a long-term replacement.

Asked about how long it would take for him to implement his own style, Ljungberg told his post-game press conference: “I say in the pre-season, in five or six weeks, you can implement how you want to play football. That’s the good thing about pre-season.

“It’s not what I have and I just try to do small building blocks and try to change things in a slow tempo, so hopefully we can understand it and practice it, but right now we have players who need to recover and we probably only get one and a half (training sessions) again before the next game.

“That’s football, for me I just try to make it as simple as possible for the players and hopefully we can get better.”

Before the game, Ljungberg apologised to youngster Reiss Nelson for having to leave him out of the squad. Interestingly, much like Unai Emery, when it came to making second half substitutions he too overlooked record-signing Nicolas Pepe in favour of teenagers Bukayo Saka and Gabriel Martinelli.

“Pepe is a very good player,” replied the Swede when asked why the winger wasn’t given a chance at Norwich. “Like I said, I try to look at what players have done in training and that’s how I judge them.”

Arsenal now sit eighth in the Premier League table, seven points adrift of the Champions League places. Despite the gap they have to close, Ljungberg’s insists that the club has plenty of time to turn things around.

The post Ljungberg: I try to make it simple for the players appeared first on Arseblog News – the Arsenal news site.

Suits you sir! Freddie promises to keep press up to date with matchday clobber