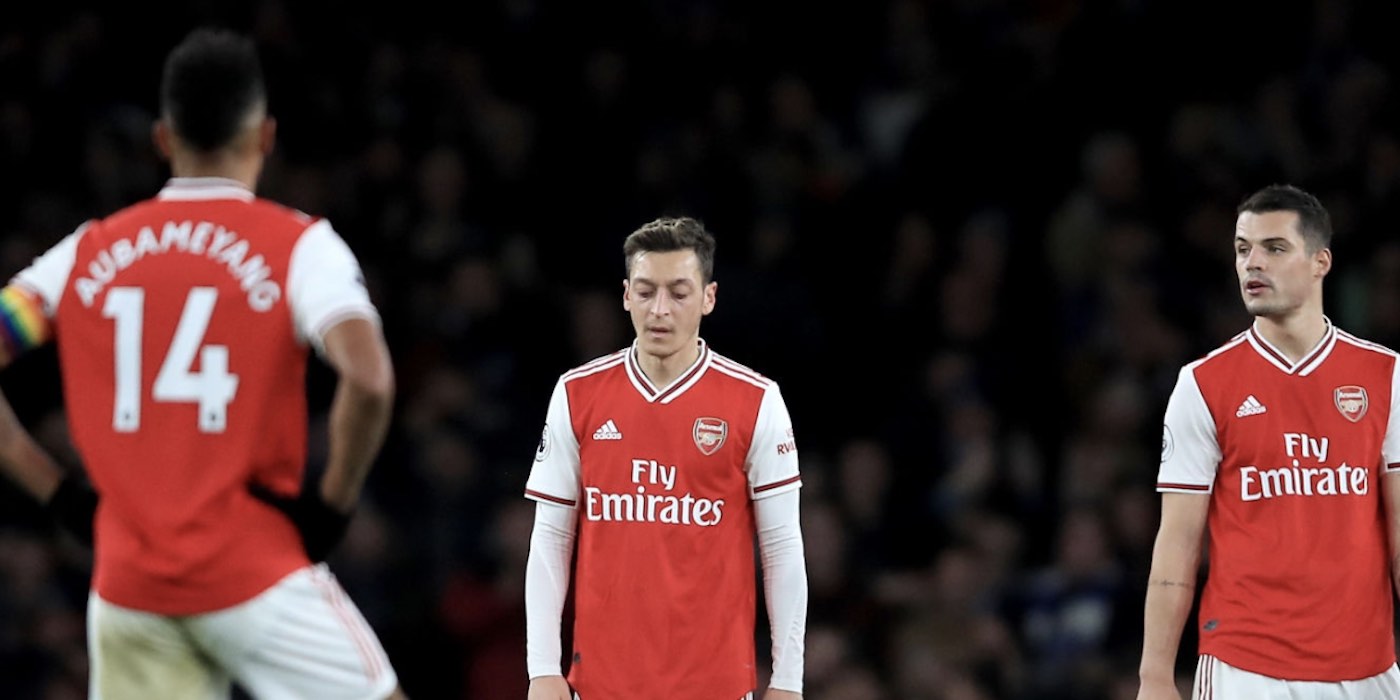 Arsenal’s recent misery continued with a 2-1 defeat to Brighton at the Emirates this evening – a result which will make it over two months without a Premier League win.

Freddie Ljungberg made a number of changes from the side that drew 2-2 with Norwich, recalling Hector Bellerin, Sokratis and Lucas Torreira to replace Calum Chambers, Shkodran Mustafi, and Matteo Guendouzi. Kieran Tierney and Nicolas Pepe remained on the bench.

The game began fairly evenly, a corner each in the opening few minutes, Willock pressing high but no real chances. Ryan saved easily from Luiz, Arsenal were caught offside a couple of times, and Leno got behind a Connolly effort well.

Bellerin picked up a yellow card for a foul on Connolly just outside the box, but the free kick thankfully hit the wall, before Webster’s header from a corner forced Leno into a routine save.

Maupay’s effort went just wide with Connolly missing a touch at the back post to put Brighton ahead. Aubameyang put one just wide, a quick free kick from Brighton almost proved costly but Leno saved very well from Maupay, and again moments later to keep the visitors at bay.

However, the pressure came from Brighton and in the 36th minute they went ahead from a corner. The set-piece came in, we didn’t win the header, it fell for Webster and he had time and space to finish from close range. 0-1.

Willock almost equalised immediately, heading on target after great work from Aubameyang, but it was almost 2-0 at the other end but for a last gasp intervention from Xhaka to prevent a one on one chance. Lacazette tried to claim a penalty that never was, Aubameyang berated Willock for what was a good pass, and Sokratis picked up a late booking before the half-time whistle.

Freddie made a half-time change, bringing on Pepe for Willock, and the Ivorian was involved immediately, running at the Brighton defence. His ball to Bellerin won Arsenal a corner, from which Lacazette looped a header to the far post and in to equalise in the 50th minute. 1-1.

The Gunners upped the tempo, Bellerin did well to put in a low cross which was headed away before Auba could get a touch, and the captain just missed a low cross from Kolasinac minutes later.

Gross was booked for handball, Luiz had a goal disallowed for offside from an Ozil set-piece, and Pepe fed Aubameyang but his effort was blocked out for a corner which came to nothing.

The Brazilian picked up a 68th minute yellow card, Ozil shot wide with his right foot after being fed by Lacazette, and in the 72nd minute Kieran Tierney replaced Kolasinac. That was followed in the 77th minute by the final change when Martinelli came on for Lacazette, but it was Brighton who struck again in the 80th minute.

A cross came in from the right, Maupay stepped back and headed into the far corner with Luiz nowhere near him. 1-2.

Martinelli almost equalised with a clever header but Ryan palmed the ball away, and when Pepe won a free kick just outside the box there was a chance for an equaliser but the Ivorian put it wide.

Trossard almost made it 3-1 in injury time, and there was no way back for a team so far in the doldrums now a relegation scrap is not beyond the realms of possibility.