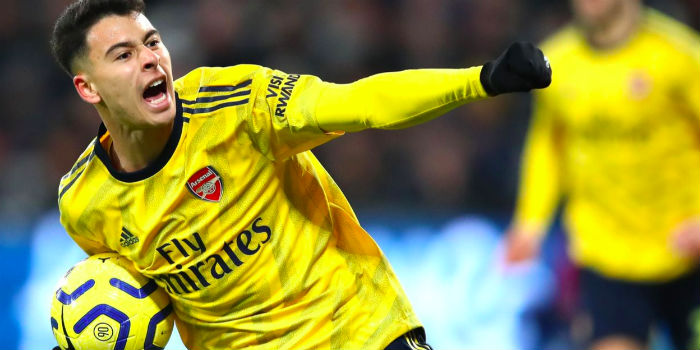 Freddie Ljungberg’s Arsenal recorded a first Premier League win in 64 days as they came from behind to beat West Ham United 3-1 at the London Stadium.

Gabriel Martinelli, Nicolas Pepe and Pierre-Emerick Aubameyang scored the goals in a barely believable ten minute second half blitz that killed off an equally poor side who’d taken the lead through Angelo Ogbonna’s deflected header on 38 minutes.

The result, the first time we’ve come from behind to win a league game in eight years, will settle nerves at the Emirates after a torrid couple of months. The three points see us climb up the table to 9th leaving us two points shy of 5th place Manchester United.

Wary of fatigue and desperate to inject some new energy, Freddie Ljungberg made five changes from the team that started the defeat to Brighton on Thursday. Calum Chambers was asked to partner Sokratis, Tierney replaced Kolasinac and Ainsley Maitland-Niles came in at right-back. Hector Bellerin, just back from a hamstring problem, was supposed to start instead but he picked up an injury in the warm-up. In attack, Martinelli and Pepe were charged with flanking Aubameyang meaning Lacazette, who so often struggles for goals on the road, dropped to the bench. Bold from the Swede.

To say we made a tentative start was an understatement. West Ham seemed entirely content on letting us have the ball and with it, we seemed to have little intention of going forward. Instead, the ball repeatedly went back and forth across the back four. Naturally, as soon as we made a loose pass through the middle, we got turned on the counter and Antonio fired over Leno’s bar.

To be fair, that aside, West Ham were laughably passive. If it was a game of cat and mouse, both the cat and the mouse looked stoned. Pepe showed neat flashes of his close control and Ozil drifted into spaces threatening to pick passes but the movement in front was limited and ‘moves’ fizzled out quickly. By the 25th minute, neither side had managed a shot on target.

Kieran Tierney’s evening came to a premature evening before the half-hour mark. His shoulder seemed to pop as we defended a set piece and he was helped from the pitch by the medical team using his shirt as a makeshift sling. Earlier in the day, it had been reported that the Scot had been playing with a shoulder problem. Given the games are coming thick and fast, he’ll likely miss much of the Christmas schedule. Sead Kolasinac, called up to the bench having started the evening out of the squad, came on in his place.

To make matters worse, a crunching tackle by Cresswell on Pepe left the Ivorian in a crumpled heap and clutching his knee. After a couple of minutes of treatment, he returned to the fray to the sound of home fan boos.

In between, both sides had chances. Ozil should have broken the deadlock but couldn’t keep a header down after neat play by Aubameyang. At the other end, Leno blocked a powerful drive on the diagonal by Antonio.

Seven minutes before the break, the Hammers did put the ball in the back of the net. After twice failing to clear a corner, Ogbonna’s header in a crowded box took a huge deflection off Maitland-Niles leaving Leno flat-footed. Not even a VAR review for handball could rescue us. The goal was given. (1-0)

In stoppage time, Aubameyang, full of frustration, attempted to take matters into his own hands. He danced past a couple of players and unleashed from 30-yards. The ball flew miles over. Row X stuff in most stadiums, row A at the London Stadium.

On Thursday against Brighton, we did well after the break before petering out. Here we did the opposite. Sokratis set the tone for a dispiriting opening 15 minutes, cocking up a drag back deep in his own half before hacking the ball out of play. The home side sensed blood as we continued to make life difficult for ourselves.

Xhaka produced a classic Xhaka moment, wafting a pass across midfield to Snodgrass, who darted goalwards and got off a shot that deflected up and over Leno and just wide. It was a huge let-off for the Swiss midfielder. Soon after, Pepe surrendered possession and the Hammers worked a chance for Rice who stung Leno’s palms.

Honestly, we were getting worse, not better. So it was hugely surprising that we put together a move that led to an equaliser. Torreira worked the ball out to Kolasinac on the left flank, the Bosnian cut the ball back to Martinelli who slid home from 12-yards out. A goal on his first Premier League start for the Brazilian. (1-1)

Suddenly, West Ham looked shaky. Suddenly, we were pressing higher, passing quicker, pushing forward. Ozil to Aubameyang to Pepe. Inside he cut; onto his left foot. Goal. A goal from the moment it left his foot. Brilliant. He was mobbed by yellow shirts in front of the travelling fans. (2-1)

Would we sit back and defend or go for more. We went for more. Aubameyang, given the ball by Ozil, backheeled to Pepe, darted into the box and then volleyed home when the Ivorian’s clipped pass found him in the box. An acrobatic finish. A captain’s finish. A goal of huge importance. (3-1)

A block by Balbuena denied Torreira a fourth and Pepe went down looking for a penalty but Mike Dean waved away his claim. Xhaka took a ball in the face that left him dazed and confused. Was he concussed? He looked it. If nothing else, his time with the medics took the sting out of the game. The midfielder initially continued before being replaced by Guendouzi with five minutes remaining. Not long after, Pepe went off to a standing ovation from the travelling fans who added a comedic soundtrack to seven minutes of stoppage time with a rendition of ‘we are staying up’.

Had we lost tonight, we might have been one point off the relegation zone ahead of Sunday’s clash with Manchester City. It’s too premature to say we’ve turned a page, but this was important. For the fans, for Freddie and for the players. We go again on Thursday in Belgium against Standard Liege.

Manchester United 1-1 Arsenal: By the numbers

Nketiah: I’ll never be happy on the bench