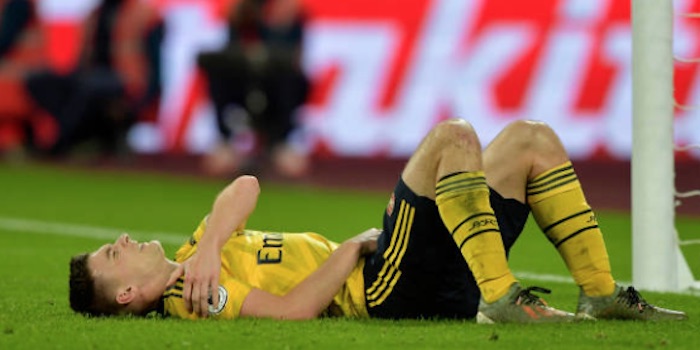 Arsenal have a host of injuries to contend with ahead of tomorrow night’s Europa League clash with Standard Liege, and Sunday’s clash with Man City.

The most serious appears to be confirmation of a dislocated shoulder sustained by Kieran Tierney during Monday’s 3-1 win over West Ham. The Scotland international now faces a period on the sidelines, although the official update says he’s ‘currently undergoing further assessment and investigations’, he’s likely be out for some time.

Granit Xhaka will miss both game after he got hit in the head with the ball at the London Stadium and suffered a concussion; Hector Bellerin’s hamstring keeps him out of the Europa League, as does a knee injury for Nicolas Pepe – which no doubt stemmed from that brutal challenge from Aaron Crewsell.

Meanwhile, Rob Holding is not expected to return to full training for another couple of weeks because of a knee problem, while Dani Ceballos remains sidelined with a hamstring strain.

Whatever about the Liege game, these problems certainly provide Freddie Ljungberg with plenty of thinking ahead of what’s sure to be a very difficult Man City match on Sunday.

The post Arsenal sustain litany of injuries ahead of Liege and City fixtures appeared first on Arseblog News – the Arsenal news site.

Optimistic Emery says he knows how to improve performances

Emery: We didn’t deserve to lose

Pepe: Lack of pre-season has taken a toll