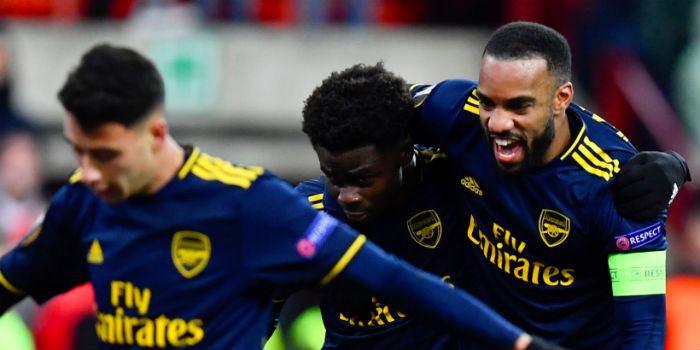 A drab game ignited in the second half when Andrei Burca and Selim Amallah both scored with the aid of deflections for the home side.

Thankfully, Freddie Ljungberg’s youthful side regained composure and their late showing, coupled with Vitoria’s surprise win over Frankfurt, means we progress to the knockout stages.

As expected, Freddie Ljungberg made a number of changes from the side that faced West Ham. A new-look three-man backline saw Dinos Mavropanos, making his European debut, join forces with David Luiz and Sokratis. Outside them, Bukayo Saka was asked to play left wing-back with Ainsley Maitland-Niles on the right. Academy trio Reiss Nelson, Emile Smith Rowe and Joe Willock made up the midfield with Alex Lacazette captaining the side as the lone striker.

Arsenal’s only real aim for the evening was to not concede five goals and, unsurprisingly, given the near dead-rubber status of the game, it proved not to be a thrill-fest in the opening 45 minutes. The home side probed here and there but for the most part, a couple of nervy attempts to play out from the back aside, we were comfortable.

Emile Smith Rowe was a bright spark for the Gunners and he had our best chance, darting through the middle to collect a pass from Lacazette before arrowing a shot on the diagonal that keeper Bodart saved with his toes.

Nelson and Saka also enjoyed themselves down the left. Our auxiliary wing-back tried his luck on three occasions. First Bodart came to the rescue with his feet again, a second effort went over and a third was parried before the rebound was played to Nelson whose header was tame.

Other than Guendouzi playing the role of professional shit-stirrer, Luiz trying his luck from his own half, Lacazette clipping the heels of everyone in his path and one of the Standard Liege lads catching the ball in the middle of the pitch for no reason whatsoever, it was dull.

Liege hadn’t really looked like scoring in the first half so it was typical that they took the lead inside two minutes of the restart via a pot shot that took a huge deflection. Bastien, under no pressure at all, tried his luck from 25-yards, it flicked off Sokratis’ arm, Martinez couldn’t change direction in time and the ball nestled in the back of the net. (1-0)

Things went back to being very boring for 20 minutes. And then we conceded another goal via a deflection. Classic. Apparently, you’re not allowed to score against us unless it comes off one of our players. On this occasion, Willock gave the ball away in our box and Amallah’s shot clipped Mavropanos’ arm before finding the corner. (2-0)

Ljungberg changed formation and sent on Martinelli and Chambers for Sokratis and Maitland-Niles and not long after Lacazette reduced the deficit to arrest any nerves of a monumental collapse. The Frenchman rose in the six-yard box to crash home a header from a superb Saka cross. (2-1)

Having looked dead and buried, we immediately went and grabbed an equaliser. Saka, a star of earlier games in this competition, played a one-two with Martinelli before tucking home with a curling effort from the edge of the box. It was a beautifully composed finish from the youngster. (2-2)

At the time of our leveller, we still needed a win to secure top spot in the group but then word made it from Germany that Frankfurt had suffered a collapse against Vitoria and our result didn’t matter. Well, not for us anyway. In the dying seconds Liege realised that if they hadn’t fluffed their lines, they’d have gone through too.

Tough tits for them.

Chambers: We need to work hard and stay positive