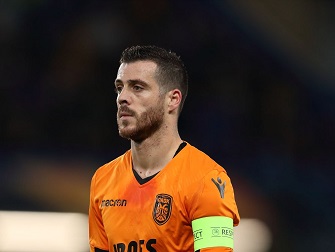 Pedro Martins’ table-toppers are still undefeated in the league this season after a 4-0 win over Lamia, on a weekend which saw typically high Portuguese involvement across the schedule.

Vieirinha’s winning penalty at the Toumbas Stadium was won and converted by the former Porto man following a tangle with countryman André Simões. After a goalless first half, the decisive moment came ten minutes into the second period when ex-Moreirense midfielder Simões pulled Vieirinha down inside the area for a spot-kick, which PAOK’s captain smashed down the middle as Vasileiros Barkas dived right.

During his post-match interview PAOK boss Abel admitted that as is often the case this derby was “won by the smallest margin” in reference to Vieirinha's strike, which was his fourth league goal of the season, having made a remarkably smooth comeback from an ACL injury suffered last spring. AEK, currently in third place in the standings, had three Portuguese on the bench and Nélson Oliveira was introduced not long after the goal, while Paulinho and Hélder Lopes went unused.

Olympiacos stay one point clear at the top with their impressive 4-0 win at Lamia. Goalkeeper José Sá and defender Rúben Semedo both featured for Pedro Martins’ side, who were without Daniel Podence as well as several other absentees. “The victory is due to teamwork,” Martins said after the match. “It was a complete performance with many good aspects. We showed personality and character and we are very pleased with Olympiacos. It's a game that represents our team.”

This season represents a change in the final stages of the Greek season, with the top six teams entering into a play-off to decide the champions and European qualification.

No let-up from Benfica, Porto bounce back, Braga bandwagon rolls on