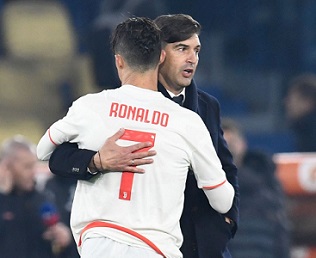 Juventus scored two early goals in the Italian capital on the way to winning Sunday evening’s big Serie A clash with Roma, on a night overshadowed by a serious injury to Nicolo Zaniolo.

Cristiano Ronaldo’s penalty added to an opener by Merih Demiral as the champions took a two-goal lead inside ten minutes, but Paulo Fonseca’s Roma fought back to make a contest of proceedings, with Zaniolo’s injury another disruption for the Giallorossi.

Portuguese boss Fonseca has proved a popular figure at the Stadio Olimpico as he sets about changing the philosophy of Roma’s play, but after Demiral’s back-post opener the second Juventus goal came from disastrous build-up play from the hosts. Goalkeeper Pau Lopez played a straight pass to Jordan Veretout on the edge of his own penalty area and the Frenchman dallied on the ball before losing possession to Paulo Dybala and subsequently fouling the Juve man.

Ronaldo stepped up to take the penalty and send Lopez the wrong way for his 14th league goal from just 16 appearances in Serie A. Roma responded well but Zaniolo’s injury – later confirmed to be an ACL tear – ten minutes before half time contributed to a downbeat interval for Fonseca’s men.

Diego Perotti halved the deficit midway through the second half from the penalty spot following a handball by former Porto left-back Alex Sandro, but Juventus held on to claim three points and move two points clear at the top of the table. Roma drop to 5th this weekend behind Atalanta, with both sides on 35 points at the halfway stage of the season.

“We gifted a side like Juve two goals so early, but after that we played well and had a good second half, but after the penalty it was difficult to turn it around,” Fonseca said. “Situations like this can happen when you want to play out from the back, because this is the style of football I believe in as a coach. We work on these situations, but they still happen.

“I don’t believe in a type of football where we don’t try to play out from the back. I believe in a courageous football and one that means taking risks. Errors can happen, what mattered to me was the reaction after that and I think we played well. I am proud of how we continued the match.”

Sarri: 'Got to work on set plays'

Sporting: The all-in on Amorim