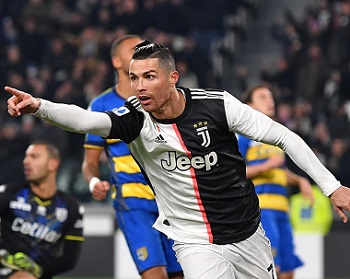 Cristiano Ronaldo made it six goals in three games since the turn of the year with a match-winning brace as Juventus beat Parma 2-1 to extend their lead at the top of Serie A.

Ronaldo scored in each half, either side of Andreas Cornelius’ equaliser for Parma, who were captained by veteran former Seleção defender Bruno Alves. His latest double means Ronaldo now has 16 league goals from just 17 appearances in Italy’s top flight.

The Portugal captain’s first saw him cut in from the left side onto his right foot before unleashing a shot which took a deflection to beat Parma goalkeeper Luigi Sepe shortly before half time. Cornelius drew the visitors level with a headed goal from a corner on 55 minutes but Ronaldo restored Juve’s advantage with what proved the winning goal just a few minutes later, racing onto Paulo Dybala’s cutback to finish with his right foot.

Speaking after the match, Ronaldo told reporters: “It was important that we win. We knew Inter drew and Lazio won, so it was important to build an advantage. It was tough, Parma are very organised and difficult to beat, but we fought hard and got the victory. Parma were pushing forward in the final stages, getting bodies into the box and we were struggling to clear our lines for a while. It can happen, we got a little tense, but the important thing is that we picked up the points.”

Juve boss Maurizio Sarri spoke about his top goalscorer in glowing terms during his post-match media duties. “You have a world class player who might cause you a few problems every now and then, but can also resolve 100 of them,” Sarri said. “So you have to take him into account and work around his characteristics.”

Elsewhere in Italy, Paulo Fonseca said his team had an “almost perfect” first-half performance on the way to a 3-1 win at Genoa to maintain their top four status, while Rafael Leão played the full ninety minutes as Milan beat Udinese 3-2 at San Siro.

PortuGOAL Figure of the Week: Corona conjures some magic to seal Porto victory

United back in for Mandzukic?