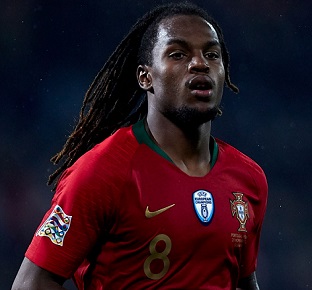 Portugal midfielder Renato Sanches spoke to the French media on Friday ahead of Lille’s Ligue 1 showdown with Paris Saint-Germain on Sunday, and the former Benfica man’s recent impressive performances were the subject of discussion.

Sanches has been in fine form for Lille since his summer move from German champions Bayern Munich. The 22-year-old scored in the team’s last match in midweek against Lyon in the Coupe de la Ligue semi-final, albeit Sanches ultimately suffered the disappointment of missing the final penalty as Lille lost out on a place in the final.

Nevertheless, the vibe around the Amadora native is unquestionably positive at present. “I'm getting better and better and I feel better and better,” he told journalists. “It's normal for players to evolve, I do my job and the team, the technical staff and the club have helped. Feeling the confidence of the people around us is very important and makes us want to do even better.

“I feel happy, I have adapted in the club and also in the philosophy of [coach] Christophe Galtier. When I arrived the team was very different from the one I came from, so things did not go as expected. I had some injury problems but I recovered and now I’m integrated into the system. The team is young, there are some Portuguese and it was easy to get used to things. I do not feel that I am at my best level, it’s still not at the level I want. I feel I can do better if I keep working and stay focused.”

Sanches left Germany after a troublesome last year in Munich during which minutes on the field were scarce. As a member of Portugal’s European Championship winning side of 2016, the necessity for a strong season ahead of this summer’s tournament was seen by many as the main cause for Sanches to finally leave Bayern.

“I came to Lille to play and show that I am a good enough player to go to the national team,” he said. “The Portuguese team has always been one of my goals. Of course, I want to be at Euro 2020 and I will work and do my best to be there and be part of the Portugal squad.”

Related article: “I matured at Bayern” Renato Sanches speaks of growth after fighting for his fresh start with Lille

As for PSG on Sunday evening, a chance for Sanches to demonstrate his rapidly improving form against one of Europe’s strongest sides. “It will be a good game,” he told the press conference. “We are very strong at home, we have won almost every game. We will play against a difficult opponent, but it will be different from the match in Paris. We will do our best to win the game.”