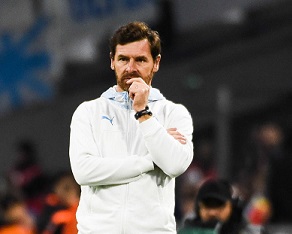 Marseille took another significant step towards finishing the season as runners-up by coming from behind to win 2-1 at Lille on Sunday evening in Ligue 1.

André Villas-Boas’ side fell behind early in the second half but a quickfire double through Reinaldo’s own goal and a winner by Dario Benedetto gave Marseille the points and opened up an 11-point gap to third in the table.

The highly-anticipated final clash of matchday 25 in the French top flight saw strong Portuguese involvement, with Villas-Boas coming up against a Lille side containing José Fonte, Tiago Djaló and Renato Sanches, all of whom played the full ninety minutes for Christophe Galtier’s side.

After a lowkey first half, the game sprung into life when Nigerian striker Victor Osimhen gave Lille the lead with a deft finish five minutes after the re-start. Marseille missed a penalty on the hour when Valentin Rongier’s effort was saved, but Lille’s former Benfica and Belenenses defender Reinildo glanced into his own net from a corner on 66’ and just three minutes later Benedetto converted Valerie Germain’s centre for what proved the winner.

After the match, it was put to Villas-Boas that his side appeared happy to play for a draw until Lille scored the opener. “It's true, we were waiting for them a bit,” said the former Porto boss. “70 minutes of defensive football and 20 minutes more attacking. We talked about it at halftime: if we concede a goal, what are we going to do? We moved Sanson up the pitch and it worked very well for us. We pressed more, were aggressive and we succeeded with the introduction of Marley Aké, who was decisive.

“We played a decent match, while waiting for space, we didn't do much in the first half. In the second, with mental and physical aggression, it was better. After the penalty we took more risks and Rémy's substitution helped us a bit because we didn't have as much pressure on our building up phase.

“Congratulations to the team, [our league position] is a great success. If we put aside the PSG Galacticos, OM is the best team in Ligue 1. There is no denying it. We put our direct opponents eleven and twelve points behind us, it is a considerable difference. Tonight was a big step. We cannot say we are certain [of 2nd] so we must keep working for the last 13 games, to make it mathematically certain. But it’s a gap that allows us to control the situation.

Meanwhile, Lille vice-captain Fonte lamented the costly period in which Marseille turned the game. “Five minutes of relaxation is not possible in a high-level match like this,” said the experienced stopper. “We gave away two goals. It's amazing, but we have to keep working because there are 13 games left and we need to finish in the top three.”