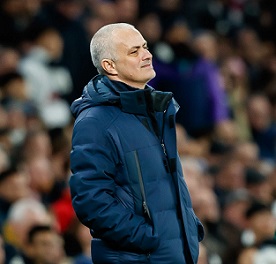 Tottenham Hotspur boss José Mourinho said it was “like going to a gun fight without bullets” after seeing his depleted frontline struggle to a 1-0 home defeat against RB Leipzig in the Champions League.

Elsewhere during the first legs of the round of 16, there was a win for Raphaël Guerreiro’s Borussia Dortmund over Paris Saint-Germain, while Gonçalo Guedes was selected by Valencia as the Spaniards suffered a disastrous 4-1 loss to Atalanta in Italy.

Spurs boss Mourinho became irked during his post-match media duties after watching the Premier League outfit beaten in London. Questions tended to infer criticism that it took the home side too long to put pressure on their opponents, but Mourinho preferred to praise his squad for coping with injuries to Harry Kane, Son Heung-Min and Moussa Sissoko, as well as Erik Lamela and Tanguy Ndombele being unfit to start.

Mourinho’s team struggled to create openings and had goalkeeper Hugo Lloris to thank for important saves, keeping the deficit to just a single goal scored from the penalty spot by Timo Werner shortly before the hour. After the match, the Portuguese coach spoke sympathetically of his players.

“The boys did everything they could do,” he began. “Do you know how many training sessions Lamela had with the team? Zero. Direct from injury to working on the pitch with some physios to playing in the Champions League. That is our team. You can look at it and see two perspectives: an amazing group with amazing guys who try everything; on another side you see how we are at the moment. Our situation is like going to a gun fight without bullets.

“What worries me is not the 1-0 as it’s an open result, we can perfectly go there and win the tie. What worries me is that these are our players for the next I don’t know how many matches. We have to play in two days again. We could see Lucas, Bergwijn and Lo Celso all dead. I’m so proud of them and they did fantastic, but the other perspective is that our situation we are really in trouble.”

Mourinho refuted suggestions from a reporter that changes could have been made earlier, saying “Don’t tell me that Lamela and Ndombele should start the game because they couldn’t,” while the former Porto boss later refused to answer a question during his press conference which alluded to a poor showing by his team. “I’m not going to answer because I don’t like your question; your question is out of order,” he said.

Gedson Fernandes was selected in the line-up for Spurs, but struggled hugely to stay involved in play was withdrawn as part of a double substitution during the second half to make way for Lamela and Ndombele. During his 63 minutes on the field, Gedson made just ten passes – the fewest of all players who started the match. 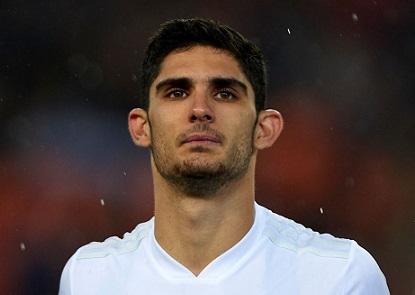 In better news, Raphaël Guerreiro continues to prove one of Portugal’s in-form players and the left wing-back helped Borussia Dortmund to a 2-1 advantage against Paris Saint-Germain going into their second leg in France. Two goals from young sensation Erling Haaland gave Dortmund the win in Germany, with Guerreiro playing the full ninety minutes.

Guerreiro was involved in the opening goal of the evening, having been picked out in the penalty area by Achraf Hakimi’s cross from the right, before seeing his attempt on goal deflected into the grateful path of Haaland. Overall Guerreiro enjoyed a pass completion of over 94% which was the third highest on the field.

With three of the four first legs ending with a one-goal difference between teams, the standout result of the week was Atalanta’s 4-1 win over Valencia at San Siro. The debutantes from Italy’s Serie A took a 4-0 lead just after the hour mark, before Denis Cheryshev’s consolation gave the Spanish side a glimmer of hope for the second leg.

Gonçalo Guedes, who last weekend was handed his first start since October, was included in Albert Celades’ visiting line-up, and the former Benfica man wasted a good opportunity in the first half when he dragged his shot well wide on his left foot. Guedes played 63 minutes before being replaced, during which time he obtained a fairly low rating on the statistical website WhoScored.

The other tie from this week’s action saw Atletico Madrid beat holders Liverpool 1-0 in the Spanish capital on Tuesday night. João Félix missed the match through injury, but there was good news for the youngster the following day as he returned to training following a minor setback in his recovery from a muscle problem.

Next week’s second half of the round involves Mário Rui’s Napoli hosting Nelson Semedo and Barcelona on Tuesday, while on the following day João Cancelo and Bernardo Silva head to Real Madrid with Manchester City and Anthony Lopes squares off against Cristiano Ronaldo as Lyon host Juventus.

Vitória stun Famalicão in race for European spots; Sporting land back in third

'Dinamo wary of one Atalanta star'