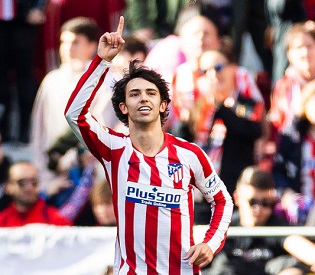 João Félix made it two goals in three appearances as the Portuguese youngster marked his return to the Atletico Madrid side with a goal during their 2-2 draw with Sevilla on Saturday in La Liga.

Félix was starting in Los Rojiblancos colours for the first time since January 26th after a setback with injuries, and the former Benfica forward produced a sparkling display which included putting the hosts 2-1 up during the first half.

The 20-year-old was substituted ten minutes from time, with reports emerging that a foot problem caused Atletico to take a precautionary measure in replacing Félix. Despite the early end to his afternoon, Félix was rated as the Man of the Match by statistical website WhoScored and the outing marks a big step in his progress in Madrid.

Ahead of the game, Atletico coach Diego Simeone had confirmed Felix would start the game after a couple of recent substitute appearances, including a goal-scoring entrance against Villarreal last weekend. Simeone said that Félix “Started [the season] with a lot of enthusiasm and excitement, then he had two injuries that took him out of his rhythm, which he is now looking to regain, and a place in the team which we all hope [for him].”

The Argentine added: “How far he goes will be where he decides to go. Normally young people get where they want to. If he wants to, he will go far.”

Félix appears to be responding to such challenges, although a yellow card incurred during the latest match means he will miss the upcoming Liga clash with Athletic next week.”